I've taken a break from this before and eventually came back to it. That may be the case again...maybe not.

I’m trying to extricate myself from life with the tech giants, for all the obvious reasons.  For now, I prefer directing my attention to other ventures. I’m fully aware of the fact that I usually haven't said anything here that can’t be found elsewhere. I just like writing and hope I’ve directed some to some critical thought regarding the events of the day.

Needless to say, we are headed for some serious trouble. It probably wouldn’t hurt to take on some mild “prepping” strategies.  At worst, your friends will call you crazy...before asking if they can barrow some toilet paper.

The American “experiment” is on the precipice. It’s been noted by many that free societies typically don’t last much longer than 240 years or so (in astrology we call that one Pluto cycle).

Decent people want to continue the amazing ride our constitution has afforded us but, there are others — many others — who never really liked the idea of a free society. Those people now dominate everything. Of course, they’ll be sorry in the end that they steered our existence off the cliff of history.

I may post something again but, if I do it will be on Wordpress or some other system free of the Googleopoly.

For now....be safe, be sane, and be aware. Knowledge, peace, and beauty.

How dare these stupid fools. There is abundant evidence of election/voter fraud in the 2020 election. No matter how many times Democrat operatives lie-on that “there is no evidence,” there is plenty of evidence, including Biden’s own words... and millions of people know it or are at least curious to want to hear the evidence.  I don’t recall companies everywhere making it forbidden to suggest fraud in previous elections when Democrats claimed election fraud or interference.

I am absolutely sick of seeing these evil dishonest totalitarian thugs coddled by every institution in the culture. 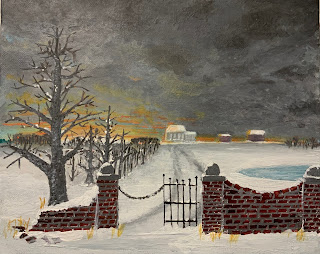 Almost every Trump controversy has involved a mischaracterization of something he didn’t say.

Welcome to the new Democrat Paradigm

Multiply instances like this a thousand times.  The price of opposition to “Orange Man.”

The MSM, legislators, and courts could have avoided the current turmoil and what’s to come by simply acknowledging the concerns of half the voting public regarding obvious “irregularities” in the election.

Addressing such concerns is completely valid and constitutional but, no, the control freak crusaders of modern leftism had to just keep on lying, coercing, and pushing.

Good luck with where that takes ya.

Notice that the leftist media cabal continually speaks of Trump’s “inciting violence” but never quotes the imagined passage where he does so. If they even tried, their weak case would collapse entirely. LISTEN TO HIS ENTIRE SPEECH.

I support the American constitution...

A short, solid, objective overview of what went down in D.C. Plus a skillful method of circumventing YouTube’s pathetic dishonest censorship scheme.

Now we can return to the serious Democrat goal of

over to a communist dictatorship.

A typical formal speech by Trump

‘Can’t wait to hear the media describe this as a “dog whistle” to “white nationalists” and assorted “fascists.”

The left got everything wrong about this president.  Corruption and fraud has put the government establishment back in charge of “its” country.  Now the slow (possibly fast) track to decline and assimilation into a “great reset” new world order of mass-surveilance, state theft and coercion, and complete squelching of independent thought and expression will begin in earnest.

The left and hordes of the mundane uninformed have given the keys of world history to the Communist Party of China.  In the not too distant future, buyer’s remorse will rule the day.

Well, first off, I was wrong. I had optimistically assumed that right (no pun intended) would prevail and that an obviously corrupted election would be rectified and Donald Trump would serve a second term.

The establishment power centers in media, big tech, and government will now begin their reconsolidation of power. When the dust settles, laws will be passed that effectively stifles conservative voices — under threat of prosecution (such nonsense is already the case in much of the western world ala Covid).

Who really believes that citizens in a fair election in Georgia  — of all places — voted for guys that despise the U.S. and hold policy positions that are essentially communist?

Nothing will be shocking now. With the Corona exaggeration at their side, the left will begin the process of dismantling the American constitution. Eliminating free expression of religion, eliminating genuinely free speech and assembly, and of course, eliminating the public’s right to defend themselves.

Every organ of legacy media and big tech has repeated the bogus mantras; “There was no election fraud”...“Claims of fraud have been debunked”...“The president has presented no evidence of voter fraud.”

If anyone has had the honest motivation to view witness testimonies, photos, and video footage, they know there is massive amounts of evidence that the presidential election was indeed stolen.  Not from Trump specifically, but from the citizens who should possess the authority to choose who will govern. Before one even wades through the evidence, common sense should tell any sane person that schemes to eliminate voter verification, prevent observation  — etc. is highly suspicious and worthy of investigation.  Add to that, a feeble-minded corrupt establishment figure garnering more votes than Obama and describing on video the “greatest voter fraud operation in history,” and curious minds should be...curious.  But curiosity is no longer a motivating factor amongst a globalist media seeking to rein in a public seen as too wayward to be given truth or honest appraisal of important events.

(Why is no one asking this feeble clown what he meant by this?)

This is a coup, by any definition. As usual, it will include massive amounts of projection, censorship, and flagrant deception from channels of information.

It’s worth watching the many hearings before state legislative bodies and considering witnesses with signed affidavits. Seeing video footage of ballots being taken from under tables and counted after observers were told to go home. Surely that’s at least worthy of investigation.  ‘Sorry but, “that’s been debunked” doesn’t trump my “lying eyes.” ....Eye witness testimony regarding ballots being delivered in early morning hours after observers were gone. Mail-in ballots seen with no creases, the same handwriting, no vote for down-ticket races and footage of ballots being scanned multiple times made it almost look like something dishonest was occurring.  ‘Statisticians noting anomolies and impossible spikes in vote tallies might convince some....but now, with CNN’s help, we know better (sarcasm intended). Those counties with over 100% voter turn out?  We can’t expect perfection I suppose.

I’m just happy to know that a charismatic candidate who tirelessly campaigned and answered so many hard-hitting questions by the media got more votes than Obama....even among black voters.

Some can now at least take satisfaction in knowing that the government will get its country back and we can all learn to obey our just overlords.

It’s absolutely unbelievable that many are deliberately writing off very valid concerns regarding the way this election was handled.

It’s all about operant conditioning in the end:

BLM and Antifa have been told to riot at will with no punishment. The Democrats have been told that they can openly flaunt serious and honest conduct in elections and they will be permitted to continue the schemes that benefited them. As for common citizens who believe in America, it’s constitution, and the rule of law, their role will now be to shut up, cease all skepticism, and join a new world order under the direction of America’s Democrat/communist party, the UN, the EU, assorted global oligarchs, and the Communist Party of China.

When the history books or the fading and silenced memories of some look back on how all this happened, they can consult approved sources and be told something along the lines of; ”orange man bad.”

The EU and the Democrats side with the communist dictator that continually steals elections so he can impose mass poverty and tyranny.